Compostability, Ronpak, and moving ahead for 2020

12 Feb Compostability, Ronpak, and moving ahead for 2020

ronpak and our environment

so...COMPOST. WHAT exactly IS IT?

Composting speeds the disintegration processes of organic matter by providing an ideal environment for bacteria and other decomposing microorganisms. The final product, humus or compost, looks and feels like fertile garden soil. This dark, crumbly, earthy-smelling stuff works wonders on all kinds of soil and provides vital nutrients to help plants grow and look better. Compost is also rich in stabilized carbon that’s produced as a by-product of the breakdown of organic materials. It’s considered a “soil amendment” rather than a fertilizer because it usually contains smaller amounts of nitrogen, phosphorus, and potassium than mineral-based commercial fertilizer products. The word “compost” first appeared as a French word in the 13th century and means “mixture of leaves, manure, etc., for fertilizing land“. The word “compost” is etymologically related to the French word “compote”. The etymological root of the french words “compost” and “compote” goes back to the Latin word “composita” which means “placed together“.

Decomposing organisms consist of bacteria, fungi, and larger organisms such as worms, sowbugs, nematodes, and numerous others.

Decomposing organisms need four key elements to thrive: nitrogen, carbon, moisture, and oxygen. For best results, mix materials high in nitrogen (such as clover, fresh grass clippings, and livestock manure) and those high in carbon (such as dried leaves and twigs). If there is not a good supply of nitrogen-rich material, a handful of general lawn fertilizer will help the nitrogen-carbon ratio. Moisture is provided by rain, but you may need to water or cover the pile to keep it damp. Turning or mixing the pile provides oxygen. Frequent turning yields faster decomposition.

- Benefits of applying compost include -

1. Restoring or enhancing the ability of sandy soil to hold moisture and clay soils to drain

3. Aiding plant growth such as in residential gardens, public landscapes or post-construction projects

Composting speeds up the natural process of decay of organic matter, such as a half-eaten apple – through systems that create the right conditions for waste-eating microorganisms. In some cases, that’s as simple as a pile of food and yard waste that someone manually turns over in a backyard. The mix of heat, nutrients, and oxygen has to be right for the process to work well; compost bins and barrels make everything hotter, which speeds up the transformation of waste into rich, dark compost that can be used in a garden as fertilizer.

What NOT to compost:

The word “compostable” or “compostability” has a definition that’s strictly controlled by the scientific standards ASTM D 6400 ASTM, and means three things:

1. BIODEGRADABILITY – it means that sixty to ninety percent of your product is going to break down within a hundred and eighty-day period.

2. DISINTEGRATION – 90 percent of your product is going to break down into itty-bitty pieces that are two millimeters in size or less.

3. ECO-TOXICITY – means that when that product breaks down in a commercial composting facility it is not going to leave heavy metals that are toxic to the soil any higher than that of a control group.

Chemically speaking, compostability and decomposition happen when micro-organisms break down organic matter into compost through a process called composting. Composting requires human management to some degree. The micro-organisms involved in decomposition are bacteria, fungi, protozoa, and rotifers. These organisms require 4 ingredients: carbon, nitrogen, oxygen, and water. Compost is rich in nutrients and is used in gardening and organic farming. The advantages of compost are that it can be used as a conditioner, fertilizer and natural pesticide for soil. Degradation of materials by microorganisms when oxygen is present is called aerobic digestion, and the degradation of materials when oxygen is not present is called anaerobic digestion. Anaerobic reactions produce methane, while aerobic reactions don’t. Both reactions produce carbon dioxide and water. We differentiate between home and commercial (industrial) composting. In the case of home composting, aerobic composting usually takes place above ground while anaerobic composting happens underground.

It’s interesting to note that several plastics are designed to be “biodegradable”, whereby biodegradable additives are added to the plastics themselves that attract and allow microorganisms to degrade the polymers. One might argue that this counts as human involvement, as well.

How does Ronpak fit in?

For years, Ronpak has demonstrated its eco-friendly commitment to producing unique and effective food packaging for its customers. Ronpak delivers on its promise to meet its customers’ expectations by using its three strategically placed U.S. locations to better coordinate delivery of supplies and eliminate overconsumption of fuel. As an environmentally sound food packaging leader, Ronpak has achieved this benchmark following its own set of corporate initiatives thoughtfully designed to meet or exceed industry regulations such as adhering to the specifications of BPI for compostability testing and membership in the Sustainable Forestry Initiative (SFI). Ronpak’s own internal sustainability goals have detailed a roadmap to complete environmental paper manufacturing compliance by 2020. 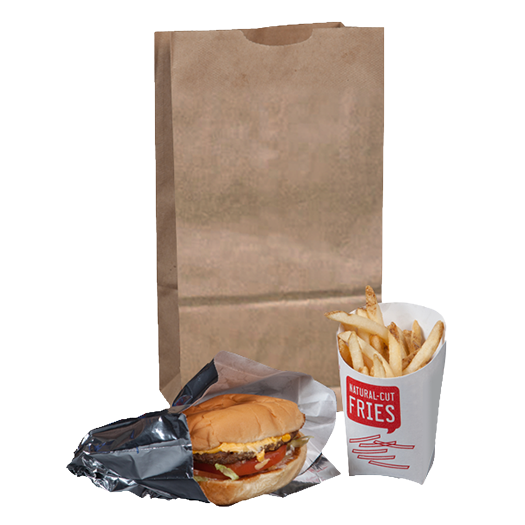 The standard details requirements for bags to be considered biodegradable. A plastic shopping bag is a bag that is made, in whole or in part, of polyethylene with a thickness of less than 35 microns. A plastic shopping bag does not include a bag that is an integral part of the packaging in which goods are sealed prior to sale or a bag used to protect its contents from moisture or air.

This European Norm/Standard for compostability of packaging is linked to the European Directive on Packaging and Packaging Waste 94/62/EC). This certification ensures that the plastic and all other components of the product are commercially compostable (colors, labels, glues and – in case of packaging products – residues of the content).

(European Standard for compostability of plastics linked to the European Directive on Packaging and Packaging Waste 94/62/EC). EN 13432 applies when the plastic is used for packaging purposes.

(American Society for Testing and Materials) Standard Specification for Labeling of Plastics Designed to be Aerobically Composted in Municipal or Industrial Facilities. This specification covers plastics and products made from plastics that are designed to be composted in municipal and industrial aerobic composting facilities).

“Biodegradability is now the norm instead of the exception. How can you tell if a food product container is degradable or compostable? Ask the manufacturer for their third-party accreditation. This third party qualifier provides the package manufacturer with certified, independent laboratory compostability testing results – some of which could take over a year to complete."

Ronpak’s food packaging products must be compostable in addition to retaining their recyclable capacity in accordance with recognized requirements. Additionally, any Ronpak supplier must meet all FDA requirements relating to the biodegradability of their source products. Consequently, Ronpak suppliers must submit their “Letter of Guarantee”, demonstrating every supplier’s FDA compliance. Each Ronpak supplier of record has stated and subsequently proved they meet or exceed all FDA & government requirements with respect to food-based paper packaging products.

Compostability starts when a packaging product reaches the “end of life”; for Ronpak produced packaging, the bag artwork carries the “Compostable” logo and the “How-2-Recycle” stamp. These marks indicate to consumers the degree of compostability that has been reached and serve to educate the end-consumer on how to properly manage disposal after use. QR block codes educate consumers about post-use recycling.